The Ottawa Water Ski Club brings together water sports enthusiasts—both recreational and competitive—with a common passion for spending time on the water. We aim to promote the sport of water skiing in Ottawa and beyond by encouraging participation regardless of skill level. From beginners and pros to retirees and everyone in between, we want to motivate members to stay active and healthy, for the love of the sport.

The Ottawa Water Ski Club, formerly known as the Gloucester Water Ski Association (GWSA), has been around the block; or should we say, around the river. Established in 1973, we’re the longest-standing water ski club in Ottawa, and the largest in the area open to the general public. We’re a member-run, not-for-profit organization and we’ve called beautiful Eccolands Park (334 River Road) home for over 45 seasons.

We’re proud to say our club was founded by Pat Messner, a slalom specialist who holds Canada’s only Olympic medal in water skiing—a bronze in women’s slalom at the 1972 Summer Olympics—along with 4 world championship medals, 18 Canadian champion titles and 19 different Canadian records (impressive right?). Pat is now the head coach of Water Ski and Wakeboard (WSWC), Canada’s national adaptive team, and still makes use of our course from time to time.

Today, our members range from barefoot and trick skiers to wakeboarders and every enthusiast in between, but the club’s true bread and butter is slalom (come out and try the course for yourself and you’ll see why). We’re not a ski school, but we do welcome novices—both youth and adults—to come out and learn the basics of water skiing from us. Over the years, we’ve built a community made up of water skiers of all ages and skill levels, where bonds are formed among family, friends, neighbours, and strangers who all share a love of being behind the boat. Come join us; you’ll leave with sore muscles, new friends, and a renewed, or newly found passion for the sport.

Allow Us To Introduce Ourselves 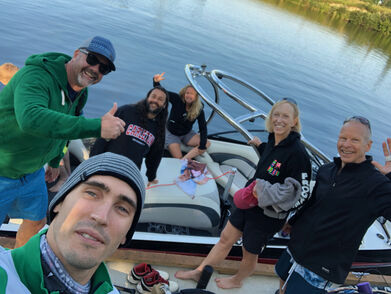